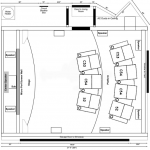 22 thoughts on “How To Ruin Your Event”