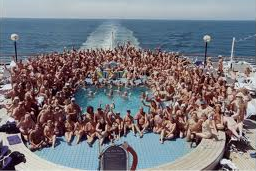 My agent recently booked me to perform on a nude cruise. All of the passengers were naked throughout the ship: in the audience, at the buffet, in the casino. That’s right – the casino. God knows where they put their winnings.

About the best thing I can say about a nude cruise is this: it teaches you to make eye contact.

What I really loved were these bald guys who’d walk around completely naked but with the “comb-over” haircut: as if to say “God forbid someone should see my bald head.”

I actually ran into an acquaintance onboard. We were getting ready to sail and I his bright green Hawaiian shirt caught my eye (clothes were required until 30 minutes out to sea). “David? David Deeble?” he said. “Oh hey!” I said lamely, immediately indicating that I couldn’t place him. He quickly ascertained that I was performing on the ship and invited me to meet him and his wife for a drink later on in the cruise. Wonderful, I say. He gives me a big hug and walks away. I then saw that he wasn’t wearing pants. I returned to my cabin in a daze and wept quietly on the floor of my shower for thirty minutes.

Like everyone else in the history of the world, I don’t think of myself as a prude. I understand why someone might like to lay in the sun and not worry about tan lines – I married a European, for crying out loud. But who thinks “I’ll be damned if I’m gonna play blackjack with my pants on”?

Just as on any other cruise, there were signs throughout the ship that said “Please do not sit on chairs in wet bathing suits.” Frankly, that would have been an improvement. And unless you can be sure that they’re always laying down the same side of the towel, what’s the point? You might as well have someone stand up, turn their underwear inside out then sit down again.

I’ll tell you who enjoyed the nude cruise themost: the guys who work down in the laundry. They were basically on vacation for two weeks.

Not everyone onboard was a nudist. There was also a breed of person I did not know existed: the spouse-of-nudist. You’d see them – usually the wife – dressed nicely playing cards or socializing over a few drinks with her naked husband and his new naked buddies. Apparently taking a spinning class with your coin purse there for all to see is now considered a hobby that your wife is expected to put up with. And I thought selling my wife on fantasy baseball would be a heavy lift.

In some ways the cruise was just like any other. There were the usual pool games, for example: water volleyball, belly flop contest, etc. Although I have to say that the ring toss was not I had come to expect up to that point.