My wife has five days off. She kicked it off by backing the car over my Kindle. I had just put the baby into the car seat then waited outside the garage for her to pull out. When she did, there was my Kindle on the floor of the garage with cartoon-like tire tracks on it. My best guess is that I was holding it under my arm and with my winter coat on I forgot it was there. While haphazardly strapping the baby into the car seat, it probably fell silently (I keep it in a vinyl case) to the ground. In any event, she crushed a couple hundred books.

I couldn’t blame her and felt no impulse to do so. When I removed the Kindle I was kind of surprised to see that the casing was perfectly intact – like new. When I attempted to turn it on, of course, it displayed the Kindle equivalent of a severe neurological problem.

The baby was dressed like a dragon for Karnival this morning. It was a beautiful costume, thoughtfully modified by our friend Annalie who surgically sewed on a tail in such a place that he could sit in perfect comfort. When I think about the thoughtful little things adults do for children I tend to get weepy.

Several Germans asked me this morning if we have Karneval in the U.S. and I said that the closest thing we have is Mardi Gras but that it’s hardly a kid-friendly celebration. It’s not even family-friendly. Who am I kidding: I’d be reluctant to bring my wife to Marci Gras.

It was downright exhilarating to spend the day with Sabine, just she and I. After dropping off Lucas at our friend’s we drove to Marcus who is, I think it’s called, an “Osteopath”. At any rate, he gave Sabine and I treatments which feel great but whose effectiveness I have very little faith. 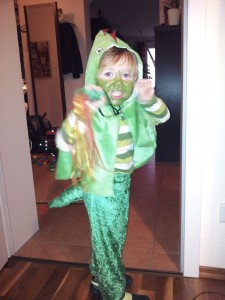 Sabine explains to me that my lack of faith is what prevents it from being effective. It’s a chicken-and-egg thing.

Leaving Marcus’ we headed directly to the Zentrale Cafe. The food was good and we talked about Sabine’s plans to work part-time next year and I expressed my wholehearted support. I felt grateful that a simple trip to a cafe with my wife felt like the adult equivalent of Christmas morning.

Then we went and bought me a new tie and pocket square and a couple of small toys for Lucas.

Once home, Sabine and I watched “Julie and Julia”, Nora Ephron’s homage to Julia Child. For this, I figure Sabine now owes me big time. Actually I enjoyed it, at least until one of the two main characters is hauled into her boss’ office, is warned that the success of her new blog is compromising her work and told, in effect, to shape up. The scene concludes with her boss adding, gratuitously, “A Republican would have fired you”. Nora Ephron’s conceit is staggering…

1 thought on “My Wife Has A Few Days Off”