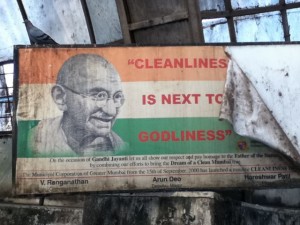 Did you now that while under British rule Bombay was known as “The Queen’s Necklace”? If that’s the case, I can only say that the King clearly did NOT go to Jared.

Let’s face it: Bombay is a dump. Changing its name to “Mumbai” won’t change that. If cleanliness is really next to Godliness then Godliness isn’t in the same hemisphere as Bombay.

Don’t get me wrong – the people are wonderful. During my stay I was honored to be given the key to the city. It was a busted rat trap, but still…

I must admit it’s a bit odd, though, that even the anti-littering public service announcements look as if they were flushed down the toilet, removed from the sewer and then hastily re-pasted to the billboard. But this is impossible, as Bombay has no sewers.