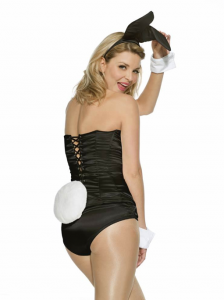 Male sexuality is so strange. I mean seriously: bunny ears? And yet, it works for me. Maybe it makes her look taller – longer legs, etc. The ears by themselves do  little for me – I want to be clear on that – but when you put the ears and the server together, well, that’s when the magic happens.

I like the floppy variety (pictured above). Some servers go with the standing-at-attention, old-fashioned tv antennae look, but the floppy ones suggest to me a certain frazzled dishevelment I associate with a woman who might utter the magic words “Sure, why not?”

The cottontail is more difficult to speak intelligibly about. Functionality and aesthetics require that it be placed higher than it would be on an actual rabbit, yet I can’t shake the sensation that it should be positioned slightly lower. What can I say, I’m a realist.

Last night I performed at the Playboy Club in Cologne, Germany and one of the servers was eating carrots at the bar. I think that’s what actors call “The Method”. Anyway, she looked great and it occurred to me that looking great could, at least in theory, be parlayed into advantages that could make life easier in various ways. Just a thought – perhaps I should explore this further depth.

I don’t pretend to know how the little shirt sleeves stay in place but I’m give them my enthusiastic seal of approval. It’s almost as if she’s wearing a conservative blouse that becomes, through some extremely weird hiccup in the cosmic fabric, invisible beginning just above the wrist. I approve.