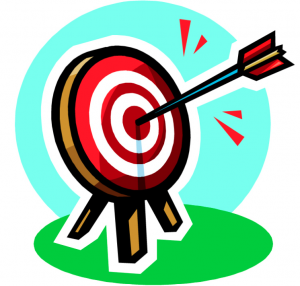 Among a sharpshooter’s bag of tricks, shooting out a candle’s flame under the darkness of night is one of the easiest. Why? The answer is simple: because there’s nothing else to see but the target.

Imagine the following experiment: two sharpshooters of identical ability – let’s call them Sallie and Sid – are given the task above. Standing directly to one side of the candle, however, and hidden in the darkness, stands an individual. Here is the variable: Sid is informed of the individual’s presence while Sallie is not.

Which shooter do you expect will have more success in accomplishing the objective? My money is on Sallie. Why? The reason is simple: Sid can’t help but balance the objective of shooting out the candle with his strong desire to not kill the individual. Sallie, meanwhile, is free to focus on the only thing she sees: the flame.

But if Sid focuses exclusively on the target, you say, then he doesn’t have to worry about killing the individual. And this, friends, is precisely my point. True, Sid probably can’t help himself. Simply knowing that an individual stands near the target is all that is required to keep him from focusing exclusively on the target. And Sid’s performance is further compromised because of the nature of the distraction: missing the target could mean catastrophe. All of these facts reinforce the why Sallie, facing the identical task, will be more likely to succeed.

When it comes to accomplishing goals, there always seems to be someone standing next to the flame. And if there isn’t, we’ll look for someone or something regardless. It’s our natural inclination is to divide our attention between that which we’re trying to avoid and that which we’re trying to accomplish. But if you want to maximize your chances of success, focus as much as possible on your objective and forget the consequences of failure.

Take a moment to ask yourself what’s standing next to your candle. If you’re like most people, it’s fear of failure that’s distracting you from taking square aim at your goal. If that’s the case, think of it this way: in firing away you may miss your target, but in doing so deliver a lethal bullet to that which is holding you back.

And what do you? Lock, load and take aim again, this time with more focus and less fear.

Return to daviDDeeble.com or watch me read how a head injury initiated my journey from conventional- to comedy juggler.