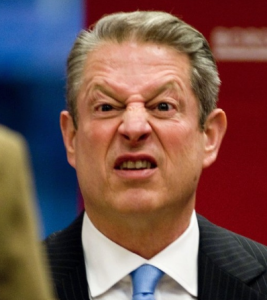 Al Gore upon discovering he must share his private jet with his hairdresser’s entourage.

A version of this post was originally published at Ricochet.com. Visit my ricochet.com archive here.

I used to believe that the sole role of government is to deliver the mail and defend the shores. I now realize that this is asking too much.

Speaking of the mail, I love the U.S. Post Office. It’s like the DMV with stamps. Have you noticed that you never see Post Office and DMV employees in the same room at the same time? I’m beginning to think they’re the same guy.

But give the federal Leviathan this: it’s sterling treatment of veterans, taxpayers and lawful immigrants should have earned our confidence in taking on the simpler tasks like managing the earth’s climate.

It’s true that every model currently relied upon by climate profits – ahem, climate prophets –  failed to predict the past 17 years of climate stasis (itself evidence of climate change). Indeed, current climate models were no more accurate in predicting the last decade-and-a-half than most leg models. None of this is to suggest that climate models are without value: at least one has shown some promise in predicting the American League Central (odd years only).

But the answer to global warming does not lie in more-accurate climate models. What our policy approaches lack most is imagination. What this moment requires is a bold, Kennedy-esque vision. I propose that by the end of this decade, we send a climate scientist back in time to the Ice Age to warn our ancestors of the impact of fossil fuels on the climate – and then return him safely to earth (or Academia, whichever comes first).

How I work is I write down my thoughts, edit them down to size and then tell them to audiences as if they had just occurred to me. It’s sort of like acting in a play which you also wrote.

One of the challenges of performing new material is maintaining the same demeanor (i.e., feigning the same confidence) as those jokes which are time-tested. It’s like suddenly bluffing in poker after a long series of hot hands.

It’s very gratifying to try new material which receives the desired response. But in stand-up comedy the real rush comes from a new joke’s second telling because you know the audience will place a coda of laughter at the end. As a result, my anxiety is replaced with anticipation, uncertainty with confidence. Instead of anticipating and observing the audience reaction my mind is free focus on my delivery, which enhances my confidence, which increases the audience’s enjoyment, and so on.

Thoughts, comments or angry retorts? Leave them in the comment section below.