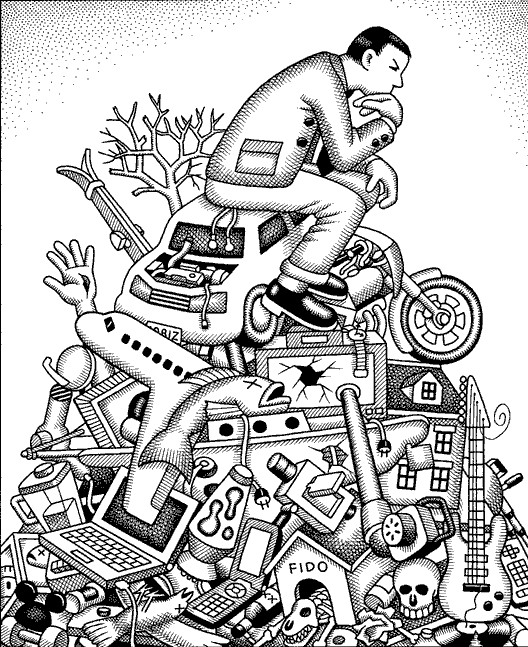 We’ve seen it so often it’s practically a ritual: an athlete who just lost the SuperBowl or the Wimbledon final is asked what it’s like to come so far only to fall just short.

“It is what it is” the athlete replies.

The following day the athlete is chided in the media for the banality of his comment.

I don’t doubt for a moment that many of those who utter this phrase are simply parroting what they’ve heard others say in similar circumstance. But wisdom is never banal, no matter how often it is uttered.

The Stoic philosopher Epictetus advised that one say precisely those words when, for example, you break your favorite mug. “It is what it is” is a magical phrase which reminds us that most of what we think of as tragedy is really just that: thoughts.

One book that made a very strong impression on me is Bunkhouse Logic by Ben Stein. Bunkhouses are the humble structures in the middle of nowhere which cowboys stayed in while transporting cattle from one part of the vast western frontier to another. Successfully delivering the cattle to their destination on time is the cowboys job: if he doesn’t succeed he doesn’t get paid.

Stein describes a scene in which a cowboy brakes his leg while goofing around or otherwise doing something he probably shouldn’t have been doing. Being a cowboy, he sets the broken bone straight, creates a splint and then repairs to the bunkhouse, starring up at the stars against the jet-black sky between the cracks in the ceiling.

His thoughts naturally turn to the fix he’s in. “Well, this is just typical”, the cowboy thinks. “When will I ever learn? I’m a fool. This is hard enough work when I’m able-bodied. What am I going to do now?”

Sound familiar? If you’re like me, you probably have a similar sequence of thoughts yourself on a daily basis. But only one of those thoughts is free of characterization. Re-read the paragraph and see if you can guess which one it is.

“This is too hard” or “I’m a loser” are characterizations. “What am I going to do now?” is the question asked by those who get things done

We can hem and haw all day about how it’s too late to save for retirement or get married. About how we seem to be on a treadmill while others go from success to success. But success begins with a radically pragmatic question: “What should I being doing right now to accomplish my goal?”

When you find the answer that question, the next question is exactly the same ad nauseum, until you accomplish your goal.

When you become familiar with this tendency to characterize events, it’s not uncommon to vilify yourself for for doing so. But remember: doing so is just another form of characterization. Simply follow-up such thoughts with the “magic” (read: pragmatic) words “What should I be doing right now?”

For more about the philosphy of Epictetus, I recommend The Art of Living translated by Sharon Lebell. Another excellent book on the importance replacing characterization with action is the the incredibly simple (not simplistic) Who Moved My Cheese? by Spencer Johnson, M.D.

Do you have thoughts on accomplishing goals? Leave them in the comment section below.

Return to www.daviDDeeble.com or watch something go horribly wrong for me at private party performance.

What’s the value of a two-dollar tip? Some might say it’s nothing to scoff at. Others might suggest that it’s very much worth scoffing at. Others still might say it depends on the service rendered.

One interpretation that often escapes us: a two-dollar tip is worth two dollars (or two-hundred cents, 16 bits, etc.)

Too often we allow our characterization of things to eclipse the things themselves. When an athlete on the losing end of a contest is mocked for saying “It is what it is” he is uttering more wisdom than his critics know.