How I work is I write down my thoughts, edit them down to size and then tell them to audiences as if they had just occurred to me. It’s sort of like acting in a play which you also wrote.

One of the challenges of performing new material is maintaining the same demeanor (i.e., feigning the same confidence) as those jokes which are time-tested. It’s like suddenly bluffing in poker after a long series of hot hands.

It’s very gratifying to try new material which receives the desired response. But in stand-up comedy the real rush comes from a new joke’s second telling because you know the audience will place a coda of laughter at the end. As a result, my anxiety is replaced with anticipation, uncertainty with confidence. Instead of anticipating and observing the audience reaction my mind is free focus on my delivery, which enhances my confidence, which increases the audience’s enjoyment, and so on.

Thoughts, comments or angry retorts? Leave them in the comment section below. 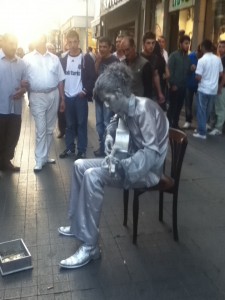 My critics say that performing my music while painted in a thick coat of silver is just a gimmick. Where do they get such crazy ideas? After all, if I was merely silver and played no music, would I get any notice? All right, maybe I would. But the truth is, the silver compliments the music, it’s not just there in order to make pedestrians pause long enough to toss a euro into my box (which is also silver). Such a crazy idea would never have occurred to me!