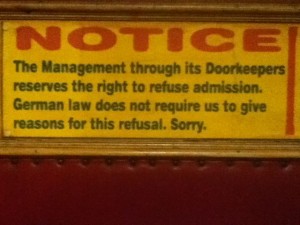 People often ask me how I like living in Germany. “It is,” I say with characteristic melodrama, “a mixed bag.” In terms of purchasing power, middle-class Germans would qualify in America as poor. Just one typical example: my wife and I are professionals and we have a combined income that is quite respectable and yet purchasing and paying for the operating costs of a clothing dryer remains a dream for us. In the meantime, we hang out clothes to dry.

But for every advantage of life in America, there seems to be a counterexample in Germany. Perhaps the biggest difference is the unbridled power of trial-lawyers in the U.S. America is the most litigious society in the history of the world. Individuals and businesses are forced to constantly look over their shoulder for the next lawsuit to come down the pike. How refreshing, then, to live much of each year in a place where trial lawyers know their place.

For example, in Germany it’s understood that you don’t lose your rights when you become a business owner. Take this guy, for example. I hear some say “He has a right to wear whatever he wants on a plane.” But what about U.S. Airways’ rights? True, U.S. Airways probably lacks the courage – much less the good PR sense – to turn him away. But commonsense suggests that individual rights – of which you’ll not find a bigger fan then me – are often in conflict. American culture essentially says “Screw the rights of the other 200 people on the plane – it’s the rights of this guy we’re going to honor.”

How refreshing, then, to see signs like this unabashedly displayed outside some German establishments. There is no gnashing of teeth, no rending of garments, no trial lawyer with flashing camera bulbs in tow. Just an acknowledgement that kooks don’t have a monopoly on rights.