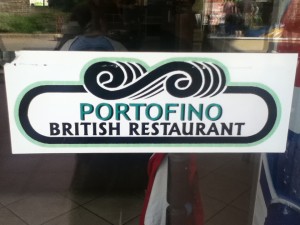 AP – Marmara, Turkey – The world’s first “British Restaurant” opened its’ doors today in this popular tourist destination. Normally considered a contradiction in terms, the proprietors believe there is market outside of England for black pudding, cucumber sandwiches and jellied eel.

“We decided to go with an Italian name to lure in people who otherwise would never dream of going out of their way to eat British food” said the owner, Mark Burroughs, adding that he had flirted with cutesy names such as “Cold Meets”, “Spotted Dicks” and, in a moment of quiet desperation, “Fish and All-Your-Chips-On-The-Table”.

Burroughs says that the key of his enterprise is to overcome the perception that other than a decent breakfast, the British have lost their culinary minds. As of press time it is unclear why the the British don’t simply extend the positive breakfast trend of warm, edible food and extend it to lunch and dinner.

In related news, France has announced the development of a new car that the world has not exactly clamored for.