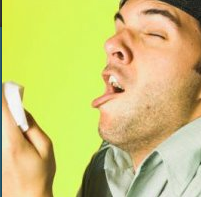 I’ll be honest with you: I thought writing this blog would be easy. I am, after all, the “creative type” – just check my tax forms! But seriously, writing anything more than the bite-size comedy that has served me so well  has proven difficult. Newspaper headlines (Shark Braves Cuban-Infested Waters; Storm Leaves Millions Of Afghans With Electricity, Running Water) come to me so easily sometimes that I have to write them down just to get them out of my damn head. I’m like the proverbial antennae that way. Same with jokes about my marriage. When I tell audiences that using “air quotes” while exchanging wedding vows is not a good idea, believe me, I didn’t have to lock myself in a secluded cabin in order to come up with it.

As of about two years ago I began experiencing more colds. I figured myself as average in the cold department, maybe a little healthier than most. But now something’s definitely changed. Much of my mental life consists of staving off boredom and colds facilitate that. Having a cold was a novelty for me: “Oh, this is kind of neat. Man, that’s a lot of snot!” But now I’d say I’ve had one at least ten percent of the time over the last two years. That seems like a lot, doesn’t it? Also, they’re nastier than average. I’ve had more than one cold in the last two years that lasted over a month. I hope it’s nothing serious: God forbid I’m cold prone.

It’s said that people with problems tend to accumulate more problems. That’s certainly been my experience. Last week I was driving my son to kindergarten and my nose began running terribly. So I closed one nostril shut with my index finger and inhaled as hard as I could. No sooner had I done so than I tweaked something inside my left shoulder blade. It was immediate and obvious: just like that I felt acute discomfort in this difficult-to-reach region.

Like I said, this was a week ago and I still have this knot in my lower shoulder. I think of it as a cold-related injury. My wife can feel it and when she massages it firmly it’s slightly nauseating. This morning I woke up early and leaned with my back to the wall and rolled up and down against a silicone juggling ball. It elicited the same feeling provoked by my wife, without, of course, the scathing criticism of my lifestyle.

I just googled “How to blow your nose”. Having read a couple of links and watched a couple of clips, I’ve gathered that it’s essential to blow one nostril at a time. So I wasn’t entirely off track. So important is this facet, in fact, that so far as I can glean, everything else is not worth mentioning. When it comes to the actual blowing, most experts also recommend  a “steady-as-she-goes” approach which does not fly well with my more shock-and-awe mindset. Part of me thinks that somewhere in me is a snot-producing tumor which can be expelled with sufficient force. I keep imagining that if I blow hard enough I’ll produce the culprit – in my mind it’s always the size and shape of a whole bulb of garlic for some reason – and the source of my sniffles will be gone for good.